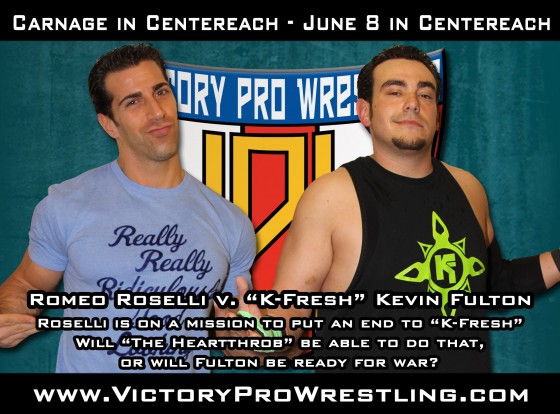 It was last fall that we saw Romeo Roselli, he interfered in a match between “K-Fresh” Kevin Fulton and Kai Katana.  He told Fulton that he wanted a match the next month, but that was before Hurricane Sandy paid Long Island a visit, cancelling the show, and seemingly cancelling the match.

But at Fans Choice 2013, after a beating unlike any other and losing his precious New York State Championship, “The Heartthrob” made a surprise return to Victory Pro Wrestling, and made a challenge to the dazed “K-Fresh.”

Citing that the fans wanted him back, he decided to give the fans what they wanted.  And at Carnage in Centereach VIII, he’s going to finish off what he started last year and finally finish off Fulton.  But not tonight, Romeo said.  He told Fulton that tonight, he wouldn’t touch him, that he’d save it all for Centereach.

Fulton, still struggling to gain his composure after being choked out, didn’t seem like he was all there while Roselli was calling him out.  Romeo went back on his promise and took down the former New York State Champion with a vicious clothesline before heading to the back with a sadistic smile on his face.

If K-Fresh’s time up?  Does Romeo have his number?  Or will Fulton fire back against the Heartthrob?