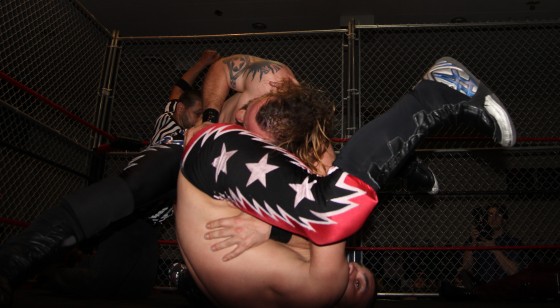 History was made at Fans Choice V as Kevin Tibbs finally reclaimed what he believed was rightfully his all along, the Victory Pro Wrestling championship. 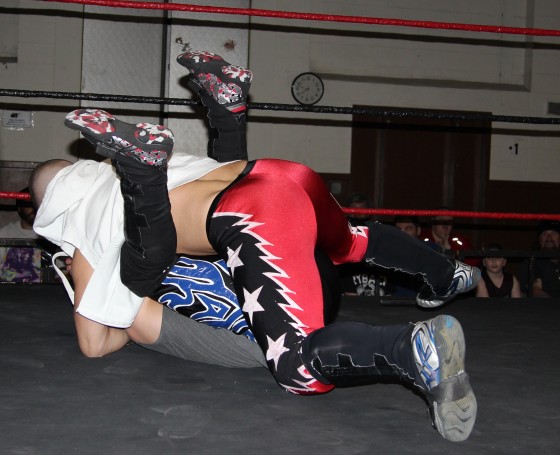 Victory Pro Wrestling’s Fans Choice V started in front of a jam packed Deer Park Community Center with the Savior of Wrestling Kevin Tibbs in the ring, talking trash about VsK and telling the fans that later on that night he would leave the steel cage as champion once again.

VsK came to the ring, bringing a microphone, looking to have a war of words with the challenger to his title.  But with no words said, the Victory Pro Wrestling champion attacked Tibbs, leaving security to break the two up.

Once the dust settled, Destructico came out and addressed the Deer Park crowd in Spanish, then translated, saying that he was supposed to face Mascara Celestial, but Celestial was too scared to face him.  Destructico challenged anyone in the back to come out to face him.

With the sirens in the air, “Firebird” Jorge Santi came to answer that challenge.

Santi had no problem filling Destructico’s empty dance card and performed above and beyond, with a desire to impress the fans.  Destructico showed an impressive lucha style of wrestling, but it wasn’t enough to beat Santi.

After the match, Santi told the fans he was excited and wanted to face the winner of the night’s main event for the Victory Pro Wrestling championship. 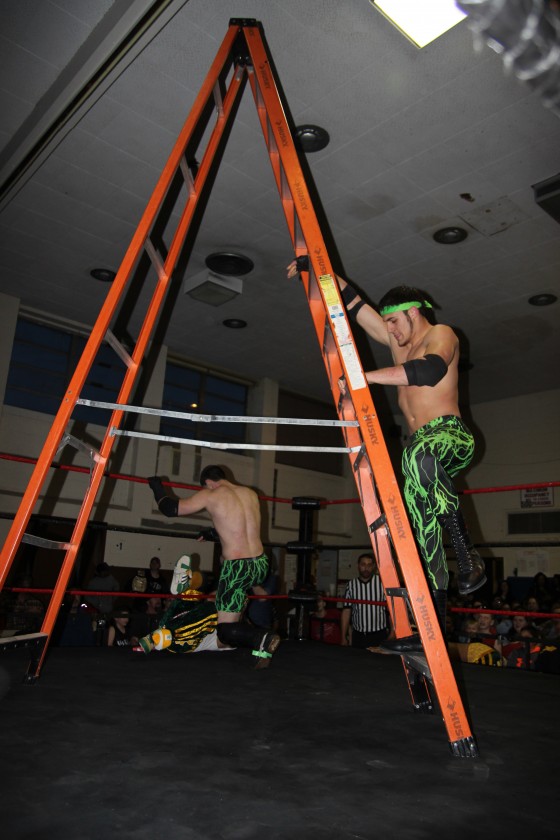 Tony and Steve tried to steal an early advantage and the win before the match even started as they grabbed a ladder and scaled to the top before the champions were even introduced!

This match was a brutal but intense match as the champions faced their toughest challenge to date.  The Jersey invasion actually had the champs reeling, but the ladders weren’t quite tall enough to capture the gold.

Spotting the tall ladder the cameraman uses to get to the top of the hard cam area, Steve held down K-MC while Tony grabbed the bigger ladder.  Once it was set-up, the titles would change hands but Cooley K came to the rescue.

The champs rallied back and eventually prevailed, unstrapping the titles and bringing them to the Boogie Down Bronx.

The former New York State Champion returned to the ring in this special attraction match featuring the New Super Best Friends as his opponents.  In a match where everyone was for themselves, it looked more like a 2 on 1 handicap than anything.

Super Pogo! and Razzle Dazzle teamed up for a few moves against the Great Eastern Sun’s monster, but Kai Katana did not let that affect him.  He eliminated Razzle Dazzle, and it was a matter of time before eliminating Super Pogo! to take the win. 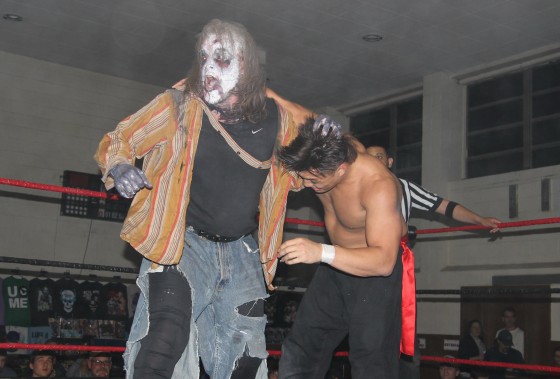 After the match, with Katana in the ring, former VPW superstar Zombie’s theme played and from the crowd came the Zombie!

He ran around the ring, then ran inside and attacked Kai Katana.  The two fought with Zombie showing a dominance on Katana that we haven’t seen against the former New York State champion.

Katana stunned Zombie, then escaped the ring and headed to the locker room.  Zombie grabbed a microphone and told the fans, “ZOMBIE… KAI KATANA… MATCH… NEXT MONTH.. BRAINS!!!”

He then charged the locker room area where Katana was waiting, and the two battled to the back.

THE JERRY FITZWATER SHOW
Today’s guests on the Fitzwater show were ConfluxXx.  Jerry lost control of the show very quick as Kevin Fulton and Ricky Reyes basically hijacked the segment.

Later on in the night, Ricky Reyes would face EJ Risk for the New York State title, but Reyes said this was his last chance to surrender the title to Reyes, the better wrestler. 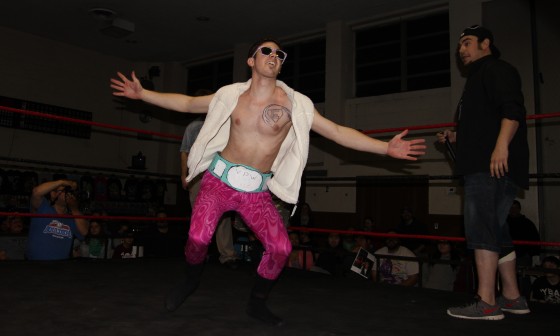 EJ Risk’s theme song played, and out came… someone dressed like EJ Risk.  A smaller, younger kid came to the ring with a fake New York State championship around his waist.

Once in the ring, the kid, wearing socks instead of boots, spun around until he was dizzy.  Reyes and Fulton then mocked “EJ”, until he got so mad he charged at Reyes, swinging his arms but unable to reach the Cuban Crippler.

Out came the real EJ Risk, with a microphone in hand, declaring that yes, he has Ricky Reyes to thank for being where he is because at one time he was a member of ConfluxXx, emphasis on “was”, citing his recent success as coming after his ConfluxXx days.

He then had all the fans in the front row stand up and pull out the pictures taped to the bottom, showing a picture of a very young Kevin Fulton and a watered down Ricky Reyes lookalike.  Reyes and Fulton were upset, but not as upset as the announcement that the New York State title match would have the rest of ConfluxXx banned from the arena during the match.

Tibbs and Hendrix came to the ring with a very big box, and Hendrix, once in the ring, announced that it was Grop’s birthday.  He offered the big gift to Grop as a sign of friendship, but all he had to do was shake his hand.

Grop finally shook his hand, and got slapped in the face for it.  Hendrix and Grop battled in the ring, with the loser getting his hair shaved. 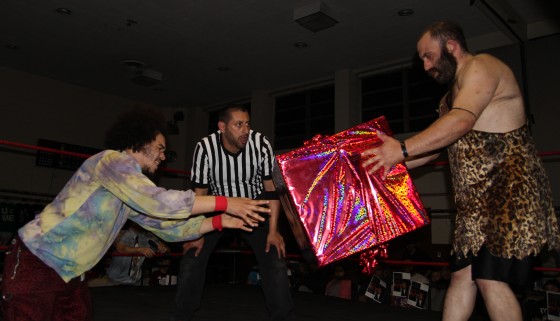 With Grop on his way to win, Tibbs told Grop to wait, to wait and open the present.  Like a deer staring into headlights, Grop stared as the huge box now in the ring.

He opened the box and there was nothing in it.  Tibbs jumped on the apron and Hendrix pulled out a super long chain, then used it to knock out Grop for the win.

A set of clippers were presented and Hendrix taped Grop’s hands together to make it easier for them to shave Grop’s hair.

Tibbs and Hendrix took turns shaving the caveman before leaving the ring satisfied with the damage they left him with.

Before the Big Koz faced whomever the fans chose to the body slam challenge, Big Koz chose a fan from the audience.  The fan, unable to slam Big Koz, was asked to leave the ring, before being attacked and thrown out by Big Koz.

Koz then said he was ready for whomever the fans chose for him.  Out came Mikey Old School, who the fans chose over Romeo Roselli and Super Pogo! for the challenge.

Old School tried to pick up Koz, but was unable to, and suffered for it.  Koz dropped him to the mat, then hit a running splash. 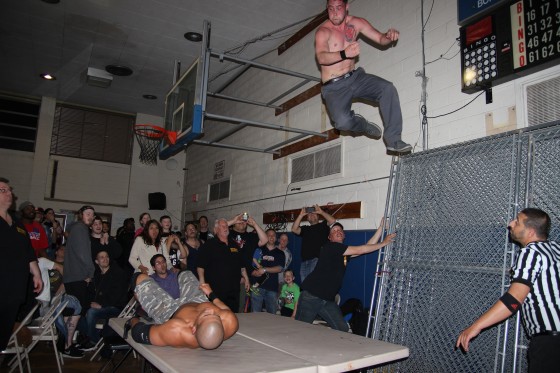 With EJ Risk paying homage earlier in the evening to Ricky Reyes, it was time to turn things up a notch in this street fight where pinfalls count anywhere, and anything goes.  The added stipulation was that ConfluxXx, Kevin Fulton and the supposedly absent Jay Delta, would be banned from the arena during the match.

Once the bell started, it was game on for both wrestlers, who quickly took things to another level outside the ring.  Using tables, chairs, and even the unassembled steel cage, Risk and Reyes refused to pull punches.

Back in the ring, Reyes hit with his brainbuster to finally end the match, but Risk would kick out at two! The battle would go on until EJ Risk finally picked up the win.

It was time for the main event.  With all the months of talk, speculation, and confrontation behind them, the end-all be-all cage would answer all the questions.

This was the biggest match on Long Island, the cult leader Kevin Tibbs against his former best friend VsK, inside the confines of a 15-foot high steel cage.

Once the announcements were over, the bell rang and there was a staredown between champion and challenger.  Tibbs chose to try to escape the cage at any chance, but VsK didn’t have at that.  When Tibbs tried to escape, Jacob Hendrix helped the door open.  Whenever VsK tried to escape, Hendrix would block the exit.

In an effort to gain a measure of revenge, and to retain the title as champion, VsK was able to wear down Tibbs.  As he attempted to leave the ring, Hendrix slammed the steel door into VsK.  He then proceeded to enter the ring, and pulled out a steel chain.

EJ Risk stormed the ring, into the cage, and knocked down Jacob Hendrix.  He then grabbed the chain and knocked Hendrix out.  Turning his attention to Tibbs, Risk charged in but was stopped by VsK, who said he was going to do this on his own.

With Risk turned to leave, Tibbs rolled the champion up for a 3-count to score the win.

With Tibbs running through the crowd, inside the cage was Risk and VsK arguing, to close the show.

What will happen when Victory Pro Wrestling returns to Centereach for Upper Limits 2014?