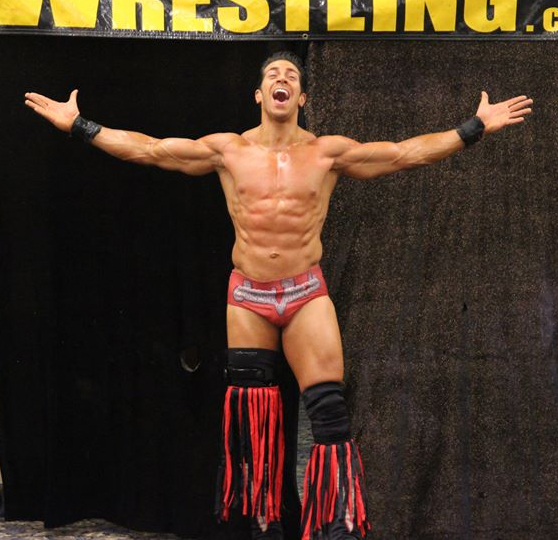 The last time we saw Romeo Roselli in Victory Pro Wrestling was in June.

At last night’s Twist of Fate show, “The Heartthrob” made a return to Victory Pro Wrestling – but why?

The former King of New York and The Cuban Crippler have history together, documented time over as they teamed together as VPW Tag Team Champions and sided together in ConfluxXx.

The former allies turned enemies background turned this match’s intensity up. With Risk close to scoring the victory several times, it was Reyes that picked up the win.

After the match, Reyes went straight to the locker room, not even acknowledging the ring announcer or Victory Pro Wrestling management, so we still did not have a clue who he had chosen for VsK to face later in the evening.

Mr. O.A. and Big Koz were introduced next, seemingly for O.A.’s match against “Firebird” Jorge Santi, but instead, Mr. O.A. introduced the “Big Koz Challenge.”

Together, they challenged anyone in the locker room to step in the ring and body slam Big Koz, offering $500 to anyone in Victory Pro Wrestling that could accomplish the feat.

When Grop the Caveman came out from the back, Mr. O.A. had a difficult time keeping a straight face. Laughing at the Caveman, Mr. O.A. ridiculed him before accepting the challenge.

Grop picked him up and was about to slam him – but as Big Koz pointed out – the objective was to body slam Big Koz, not Mr. O.A. Grop put down Mr. O.A. and went to slam Big Koz, but was unable to.

Things went bad for Grop the Caveman as Mr. O.A. then attacked him from behind. Koz and O.A. double teamed Grop, which lead to a monsterous Big Koz Splash.

With Grop the Caveman crawling to the back, Mr. O.A.’s opponent came out to the ring for their match.

Mr. O.A. (w/ Big Koz) against “Firebird” Jorge Santi
Santi is 0-1 against Mr. O.A. going into this contest, after a controversial ending to their match in Deer Park last month. This time around, Mr. O.A. turned things up a notch to score another victory over Manhattan’s native son.

However, “The Firebird” was expecting something dirty to happen. With Big Koz causing distractions, it looked like Santi would fall victim again. With the referee down, things looked more bleak.

Whipped into a corner, Santi was held in place by Mr. O.A. He had no choice but to take a Big Koz Splash in the corner, but at the last second he pulled Mr. O.A. close and escaped the carnage, with Big Koz’s friend taking the crushing avalanche. A dropkick for Big Koz to knock him outside the ring and a cover gave Santi the win.

At last month’s Deer Park show, K-Fresh Kevin Fulton said he never thought he would be teaming with Razzle Dazzle or Super Pogo!, but he made the challenge that lead to our next contest.

SIX MAN TAG TEAM MATCH
The Church of Tibbs (Jacob Hendrix, Dorian Graves, Kevin Tibbs)
against The New Super Best Friends (Razzle Dazzle and Super Pogo! w/Mikey Old School)
and K-Fresh Kevin Fulton
In a match that featured Dorian Graves taking a beating at the hands of Razzle Dazzle and Super Pogo!, the usually aggressive K-Fresh was laughing and smiling, having a great time with his tag team partners.

On the other side of the ring, Kevin Tibbs was furious that his Disciples were letting him down, screaming at his partners until he finally snapped and hit both Dazzle and Pogo! with a guitar.

He then set his sights on Fulton, smashing what was left of the guitar on Fulton’s leg before the Disciples attacked him like a bunch of savages until Mikey Old School was finally able to help K-Fresh escape and, along with Super Pogo! and Razzle Dazzle, bring him to the back.

Later, as first reported on Victory Pro Wrestling’s Facebook page, K-Fresh suffered an injury as a result of this attack.

After the match, and after the brutal assault, Tibbs praised his team as being the best team in Victory Pro Wrestling, even so much to say that they deserved to be VPW Tag Team Champions.

That’s when Cooley K and KMC came to the ring. KMC grabbed the microphone and said that someone mentioned being the best team in VPW, and that it sounded like the Church of Tibbs were looking for a title shot. Granted.

VPW TAG TEAM CHAMPIONSHIPS
The Church of Tibbs (Dorian Graves and Jacob Hendrix)
against Da Hou$e Party (Cooley K and KMC) (c)
The VPW Tag Team Champions came to deliver the message that they are the standard bearers in tag team wrestling, and that they would take on all challengers, any time.

Hendrix and Graves worked well together, and it looked bleak for Da Hou$e Party until they were able to get the upper hand after a foiled Doomsday Device style finisher by the challengers turned into another successful title defense.

After the match, Graves showed his frustrations that Hendrix was the reason why they lost.

As the show went into intermission, ring announcer John E Radioo made an announcement that Ricky Reyes has finally made his decision as to who VsK would face later on that evening. However, he refused to tell Victory Pro Wrestling management, saying that it was a surprise.

NEW YORK STATE CHAMPIONSHIP
Kai Katana (c) against “Man of Faith” Brian XL
The Asian assassin has been unstoppable since his arrival to Victory Pro Wrestling, and with the New York State championship, his intensity has risen.

Along with that intensity is the desire to win at all costs, including a couple of wins with his foot on the ropes. Last night was no exception.

Seeing that he was close to losing the championship, a frustrated Katana grabbed the title belt and looked to attack XL with it. The referee took the title away, but was distracted and did not see Katana hit XL with his ritual staff.

EJ Risk came to the ring and confronted Referee Raul, saying that Katana attacked Brian XL illegally, and should be disqualified as a result. Katana shows signs of frustration as Risk and the official argue over the call. Before they come to a conclusion, the New York State champ gets a cheap shot in on Risk and leaves the ring.

Frustrated that Katana cheated yet again to protect his championship, EJ Risk calls out Kai Katana for one more match at December Devastation, Saturday December 14, at the Deer Park Community Center.

“Savior of Wrestling” Kevin Tibbs against Amazing Red
Kevin Tibbs, still frustrated from the Church of Tibbs’ earlier loss, power walks to the ring, grabs the microphone from the ring announcer, and demands that his hand picked opponent come out for his challenge.

With ring announcer John E Radioo making the call for Amazing Red, Tibbs slips outside the ring and through the crowd so he can sneak attack Amazing Red on the way to the ring.

The attack itself was successful, but quickly backfired as Red was able to come right back and give some of what he got back to the Savior of Wrestling.

The two put on a wrestling clinic at the level of “show stealing”, but a costly mistake put Kevin Tibbs on the wrong end of a Code Red, giving the win to Amazing Red.

The celebration did not last long, as Dorian Graves and Jacob Hendrix stormed the ring and double teamed Amazing Red, putting the boots to him.

Brian XL came out to make the save, knocking both of the Disciples out the ring. With his attention focused on Tibbs, the Savior of Wrestling simply dropped and rolled out the ring to avoid a confrontation.

But he did grab a microphone said that Brian XL shouldn’t have gotten involved. Now that he did, Tibbs challenged them to a match pitting Tibbs’ Church of Tibbs against Amazing Red and Brian XL at December Devastation, Saturday December 14, at the Deer Park Community Center.

TWIST OF FATE MATCH
VsK against ???
Victory Pro Wrestling champion VsK was announced and brought to the ring by 9-year old Marcus, celebrating his birthday with VPW. Once in the ring, the champ turned to the fans and asked who they thought he would be facing.

After hearing a few answers, he gave the microphone back to the ring announcer to make the call.

The match was intense, and both wrestlers were determined to pick up the win. An Irish whip into the corner almost led to a collision between VsK and Referee Raul. However, the charge to the corner from Roselli, and VsK moving from the attack – leaving the official still in the corner – left them without an official.

VsK was able to set up a finish and make the cover, but with the referee out, there was nobody to make the count.

With VsK checking the referee, Roselli grabbed the VPW Championship and set himself up, waiting until VsK turned around and clocked him in the face with the gold.

He dragged the referee over and made the cover, but somehow VsK was able to raise his shoulder at the last second! Frustrated, Roselli left the ring and grabbed a chair. With the referee still face down on the mat, Roselli set up for a chairshot to VSK, but he moved at the last second. The chair hit the ropes, then Roselli, knocking him down.

A VsK superkick was next, and with the referee aware enough to make the count, three long seconds later, the Victory Pro Wrestling champion prevailed.

After the match, VsK asked why they should wait until December 14. He challenged Ricky Reyes to come out right there and then.

Reyes finally came out from the back, and called to the fans, asking if they wanted to see this match right there and then. With the fans chanting yes, Reyes said sure, even to the point where he took off his jogging suit and shirt – but then shook his head no, with a sly grin on his face, and walked to the back, leaving VsK and the fans disappointed.

VsK closed the show, telling Reyes to be ready, that at December Devastation, Saturday December 14, at the Deer Park Community Center, he would walk in as VPW Champion and after their 30-minute Ironman match he would remain VPW champion.