Who will Ricky Reyes choose to face VsK at Twist of Fate? 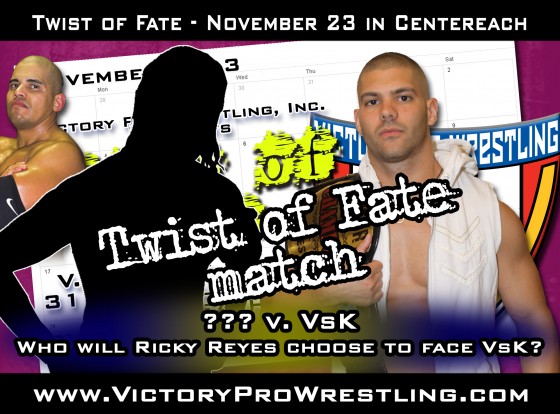 VsK was challenged by ConfluxXx for several years. At Autumn Uproar, the latest challenge came from Ricky Reyes in a best two out of three falls match, a challenge that came up short for the Cuban Crippler, leaving VsK the Victory Pro Wrestling champion as a result of a draw.

This did not sit well with the champion, and he demanded a Twist of Fate challenge for Reyes to warm up for their 30-minute Ironman match in December. VsK chose Ricky’s opponent, EJ Risk, at Autumn Uproar in front of a capacity crowd in Deer Park.

Reyes scurried off and refused to talk to VPW-TV and VictoryProWrestling.com when asked who he would choose.

Who will Ricky Reyes choose as VsK’s oppnent at Twist of Fate, Saturday November 23, in Centereach? VictoryProWrestling.com speculates on possible choices.

JAY DELTA
The easy choice is the 2013 King of New York Jay Delta. Not only is he a member of ConfluxXx, Delta and VsK have met several times. Retribution alone is a strong motivator, as VsK broke his jaw several months ago during a classic title defense in Deer Park. Delta would be on top of our list.

KEVIN TIBBS
“The Savior of Wrestling” Kevin Tibbs and Ricky Reyes may not see eye to eye, but at the 2012 King of New York, they did shake hands before wrestling an amazing match. And while ConfluxXx and Tibbs may not have been best friends since day one, over the past year they have shared a common enemy: VsK. 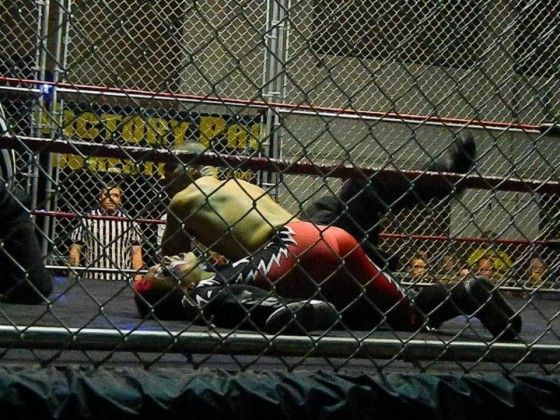 KAI KATANA
The Asian assassin has mowed down every challenge put in front of him since invading VPW in 2012. He has several wins over VsK, although VsK was able to defeat Katana inside a 15-foot high steel cage match. The New York State champion has, and would, prove to be a formidable foe for VsK, should Reyes choose him.

RICKY REYES
VsK said to chose any opponent Ricky wanted. Why not choose himself? It’s been said that if you can’t have someone do the job right, to do it yourself. Knowing they have a 30-minute Ironman match in December, this would be the perfect opportunity for Reyes to weaken the Victory Pro Wrestling champion before they fight for VPW’s top prize.

The only hint that Reyes has given is that he won’t tell anyone who he chooses until Twist of Fate, Saturday night November 23, in Centereach.

Who will Ricky Reyes choose as VsK’s opponent?