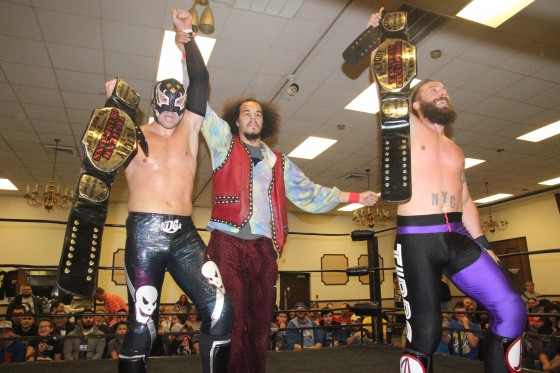 History was made in Centereach when Victory Pro Wrestling presented Autumn Uproar as Kevin Tibbs and Dorian Graves bring tag gold to the Church of Tibbs.

It all started with the announcement everyone was waiting for. Ring announcer John E Radioo brought out the 2015 Gold Rush Rumble winner Fighter Cat and asked him which title he was going to challenge for.

Fighter Cat thanked the crowd, and then announced he would be going after the New York State Championship.

Ricky Reyes and Kevin Fulton came to the ring to interject with a beat down. Reyes grabbed the microphone and announced that although EJ Risk was banned from the building, he was still in charge and the VPW Commissioner granted him a match to face Fighter Cat for the New York State Championship Number One contendership!

SINGLES MATCH
Destructico against Grammar Cop (w/ Timbershae)
Grammar Cop came out to teach Destructico a lesson on grammar, and even went so far to say Destructico couldn’t even speak English. He then proceeded to attack the lucha grappler. It took a distraction from Timbershae for Grammar Cop to edge out with a win.

WINNER: GRAMMAR COP
VPW TAG TEAM CHAMPIONSHIPS
The Down Boyz (w/ Chrissy) (c) against The Church of Tibbs (w/ Jacob Hendrix)
It all came back to the finals to crown a new VPW Tag Team champion in 2014, with the Down Boyz and the Church of Tibbs. This time around, things did not fair well for the Jersey invasion as their manager Chrissy tried to interfere but was stopped by Jacob. Tonight, new champions would be crowned.

WINNERS: THE CHURCH OF TIBBS

After the match, Steve demanded a rematch at the King of New York tournament in January. Jacob Hendrix declared that if they were getting a rematch, the Down Boyz would have to put Chrissy on the line.
SINGLES MATCH
Timbershae (w/ Grammar Cop) against Damian Adams
The singing associate of Grammar Cop brought the business end of a wrestling match to Damian Adams. The Puerto Rican native had the experience but it was nothing but number one with a bullet for Timbershae.

NUMBER ONE CONTENDERSHIP FOR THE NEW YORK STATE CHAMPIONSHIP
“The Cuban Crippler” Ricky Reyes against Fighter Cat
The ring veteran against the newcomer. A story told many times over, this time with Ricky Reyes looking to be the number one contender and challenge for the New York State championship. Fighter Cat, fresh off his victory in the Gold Rush Rumble, earned his shot yet again but not before suffering through a wrestling clinic from Reyes.

NEW YORK STATE CHAMPIONSHIP
No Rules Street Fight
EJ Risk is banned from ringside
VsK (c) against “Firebird” Jorge Santi
VsK came ready for a wrestling match, but Santi was ready for a street fight to take back his title. They battled outside the ring and into the crowd. Weapons from under the ring were used. VsK was spinebuster slammed through a wooden plank! It all ended with VsK somehow coming back and dropping Santi’s head into a chair for the finish.

WINNER: VSK
MIXED TAG TEAM MATCH
VPW Women’s Champion Nikki Addams and Razzle Dazzle w/ Mikey Old School
against Karen Yu and Xander Page
Nikki’s rivalry with Karen Yu continued, and the heat between Razzle Dazzle and Xander Page fired up. The women showed intense hatred for each other and their desire to be the better women’s wrestler. In the end it was Xander Page rolling over Razzle for the win.

After the match, Grop the Caveman came out and delivered flowers to Karen. She was caught off guard and seemed genuinely flattered. Jacob Hendrix came out and attacked Grop before being thrown through the dressing room entranceway.

VICTORY PRO WRESTLING CHAMPIONSHIP
“South Shore Outlaw” Kevin Fulton against Kai Katana (c)
This was not like the New York State championship match where Katana soundly defeated Fulton in 2013. The South Shore Outlaw came back with a vengeance and a mean streak to try and take down the VPW Champion. Both fighters took it to the limit but accidentally knocked down the official. Ricky Reyes came out for the assist but was caught by Katana, which gave the distraction edge to Fulton. Katana was out cold, but the official was unable to count. In the end, it was Katana picking up the victory after a moonsault.

After the match, the entire locker room came out into the ring and started battling each other. Eventually, the Church and Katana cleared the ring leaving them standing tall. Katana then declared that the winner of the King of New York tournament would get to face him for the Victory Pro Wrestling championship.