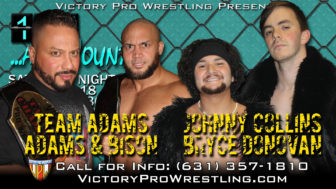 When they first teamed up in February, nobody expected anything from them. Bison’s manager deserted him, and Damian Adams was there with a contract to challenge for the VPW Tag Team Championships. Hours later, they challenged the Down Boyz and became champions.

Mind you, Tony Vincita, one half of the Down Boyz, had been unable to fulfill his contractual obligations. This left Steve Gibki to face the challenge alone. Damian Adams knew this, which is how this story started.

But Team Adams has not been unchecked. Johnny Collins and Bryce Donovan, teaming up in Victory Pro Wrestling for the first time, have proven to be a formidable force. In their debut, they had an opportunity to meet the champions and while they were unable to win, they did prove to be a force to be reckoned with.

They won a number one contendership to the tag team championship in April, and have been on the heels of Team Adams since. According to Damian Adams, Bison has been injured, and unable to compete.

VPW Management has given notice to Team Adams: Defend the titles or be stripped of them. The irony is not lost, as this Saturday it will be Team Adams defending against Collins and Donovan.