Heading into the King of New York tournament, EJ Risk had a few words for the fans.  He predicted that he would be victorious again, which he was not.

But he also said that, Crown or not, that at Before the Storm, Saturday February 8 in Centereach, he would challenge Kai Katana for the New York State Championship.

EJ Risk’s elimination from the tournament came at the hands of “Savior of Wrestling” Kevin Tibbs, the man EJ beat in 2011 and 2012 to win the crown, but not with out the help of the Church of Tibbs. 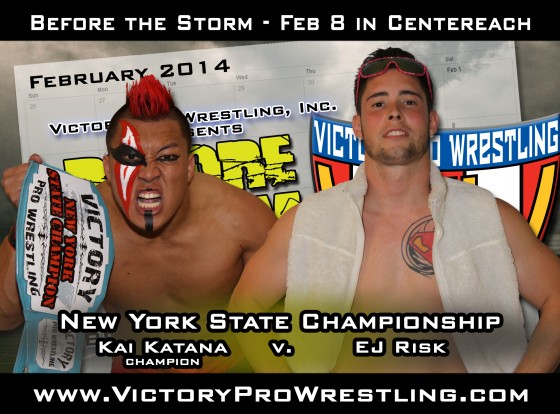 But was that the only thing against him?  With a title match for the New York State Championship February 8, EJ may have been focusing more on beating Katana than he was on overcoming the odds and being the first three-time King.

Kai Katana refused to talk with VictoryProWrestling.com but word in the locker room was that he was very angry when EJ called him out.

Can the Asian assassin retain the New York State championship, or will EJ Risk finally seal the deal and end the reign of Kai Katana?

Saturday, February 8 in Centereach, at the VFW Hall on Horseblock Road, we’ll find out when EJ Risk puts it all on the line for one last chance to become New York State champion.