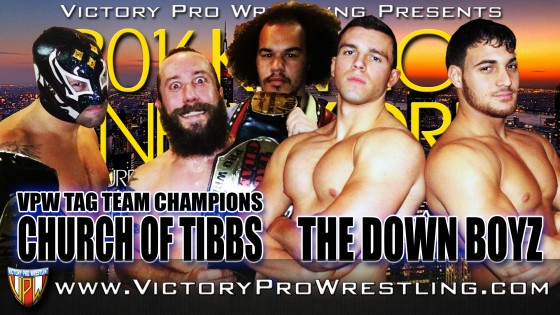 When the Down Boyz invaded Deer Park and Victory Pro Wrestling, nobody expected them to be as dominant as they have been. But the Church of Tibbs have taken the titles from Steve and Tony.  Now, at the 2016 King of New York tournament, they want more.

It started with Steve demanding a rematch, and ended with a wild remark from Jacob Hendrix about putting Chrissy, the Down Boyz’ manager, on the line if they wanted that rematch so badly.

In the back, VPW Management booked the match for the 2016 King of New York:  If the Down Boyz win, they re-claim the VPW Tag Team Championships.  However, if they lose, then the services of Chrissy belong to the Church of Tibbs.

Will the Church’s flock grow or will their tag title reign be a short one?  We’ll find out at the King of New York, Saturday January 16, when Victory Pro Wrestling returns to Centereach.