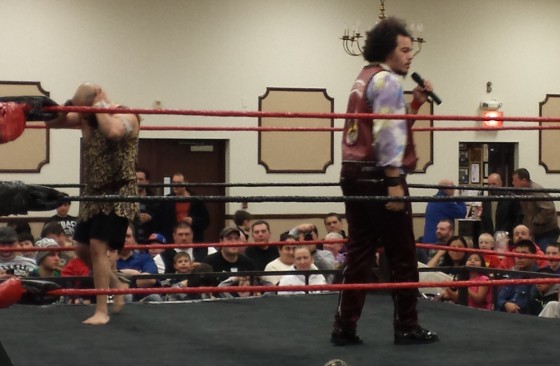 Jacob Hendrix and Grop the Caveman had been a part of the obscure part of Victory Pro Wrestling.  That changed when Hendrix became the administrative assistant to Kevin Tibbs.

Hendrix was thrust into the spotlight, accompanying then-Victory Pro Wrestling Champion Tibbs in main events.  On the other hand, Grop became a fixture on the Jerry Fitzwater Show as comedic relief.

At VPW’s Before The Storm, Hendrix approached the ring, inviting Grop to join him.  He mentioned that at one time, they ran together as the “Grop and Rock Connection,” and that they were once friends.

Things changed, times changed, and Hendrix was in a different place now.  He extended his hand, inviting Grop to join him in the Church of Tibbs. 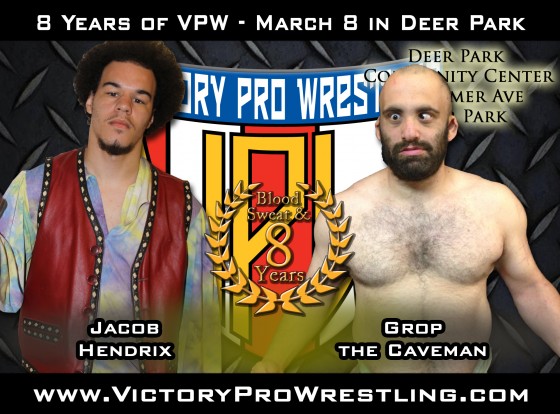 But then he said he would never work with Grop again, insulting and berating him, then challenging him to a match, before finally attacking him.  Grop fought back, though, but it wasn’t enough as Hendrix was able to hit his DDT to knock Grop down.

Hendrix looked down on Grop as Kevin Tibbs cheered along, first from the stage entrance and then from the ring, ordering Hendrix to keep the attack going by throwing a sign at the fallen Grop.

VPW management decided this was enough and signed a match at Blood Sweat & 8 Years of Victory Pro Wrestling between Grop the Caveman and Jacob Hendrix.

What will happen when Victory Pro Wrestling returns to Deer Park?  Will Grop the Caveman return the favor or will Jacob Hendrix have the last laugh?