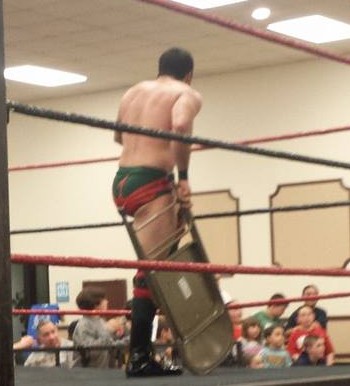 Ricky Reyes, leader of ConfluxXx, preached about how he was better than anyone in VPW, and that ConfluxXx would rise again.  Firebird Jorge Santi had other things in mind.  Shutting up the Cuban Crippler was first on his list.

At Before the Storm, it was Reyes’ cocky attitude and his overlooking his impromptu opponent that gave Manhattan’s son the chance to rise above the international superstar and pick up the win in Centereach.

The frustrated Reyes pulled out all the stops but couldn’t keep Santi down, and once the match was over, Santi stood tall as Reyes said that even though he wanted to take the New York State championship from EJ Risk, that at Blood Sweat & 8 Years in Deer Park March 8, Ricky Reyes wanted to face Jorge Santi one more time to avenge his loss. 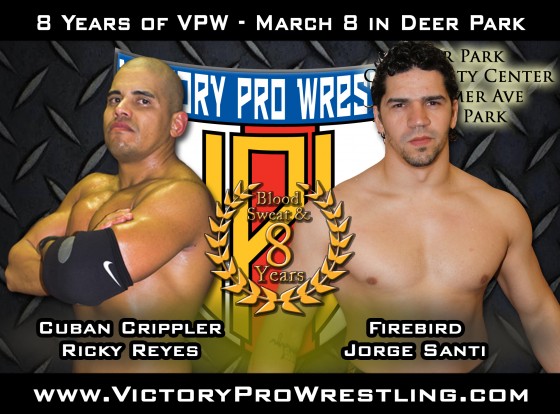 The Cuban Crippler Ricky Reyes is hungry for a win, after suffering a loss to the Firebird, but at what expense?

Rumors have been going around the past few months about ConfluxXx.  First, big Xander Page disappeared.  Then EJ Risk was kicked out.

This past summer, Jay Delta’s jaw was broken in a match that has him sidelined indefinitely.

This leaves Ricky Reyes alone, ConfluxXx in spirit, with nobody to support him.  But at Before the Storm, the stable leader brought up the infamous group and a promise that ConfluxXx would rise again.

On the other hand, Santi just came off a huge win over Reyes, a tested world professional and seasoned veteran.  Will he be able to strike again while the iron is hot?

“The fans are sick and tired of Ricky Reyes,” said Santi, “and so am I.”

He went on to tell VictoryProWrestling.com that at Blood Sweat & 8 Years, he would beat Reyes again.  And he’d beat him again in April, May, June, any time they met.

Santi says, “It’s my time, and I’m ready for anything!”