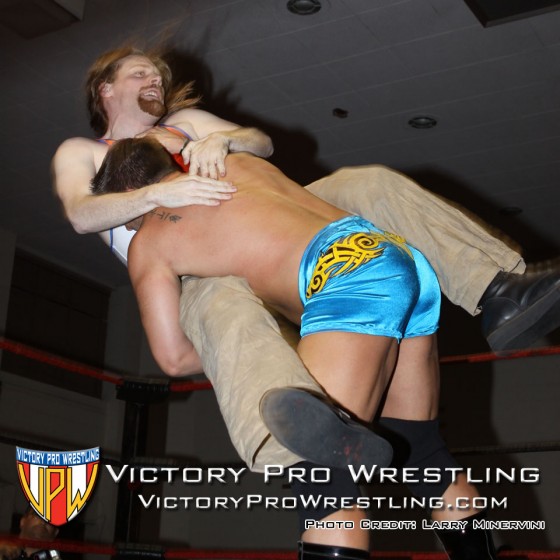 He was moments away from defeating Razzle Dazzle, who two months earlier knocked him out with a loaded penguin.

“The Iceberg” Nick Noshus waited for this moment, only to be robbed by “The Cuban Crippler” Ricky Reyes and the 2012 King of New York EJ Risk.  Together, the VPW Tag Team Champions assaulted the Noshus, giving him the win but by disqualification.

After the match, he grabbed the microphone and challenged EJ Risk for a match May 11 at Islip High School.  Risk looked at his partner, sarcastically asking for permission to fight “The Iceberg.”  But was this a mistake on his part?

Noshus overcame the odds in 2009 against 18 other VPW wrestlers in the first ever Gold Rush Rumble, not only becoming the first ever New York State Champion but by continuing his undefeated streak.  Just a mere 50 days later, the New York State Athletic Commission stripped him of the title due to injuries.  Three years later, he came back to save a fan from the clutches of Razzle Dazzle, and now is going up against EJ Risk.

Risk is no stranger to defeating the odds, either.  Not only is he the 2012 King of New York, but he is also the 2011 King of New York as well, overcoming the odds twice by outlasting 12 wrestlers – twice – and defeating <strike>Kevin</strike> Mr. Tibbs both times in the finals.  As one half of the VPW Tag Team Champions, EJ is one of the most ruthless wrestlers in Victory Pro Wrestling, as well as one of the most colorful.

Does Noshus have what it takes to beat Risk?  “Not a chance,” says EJ.  “Look at him, and look at me.  I have the better body, I’m the better wrestler, and let’s face it, when he was licking his wounds for three years, I became the two time – TWO TIME – King of New York, and I’m one half of the VPW Tag Team Champs!

“Say something to that!”