Backstage, before Victory Pro Wrestling’s September Salvation, there was a buzz about something big happening.  VPW Management had met with EJ Risk and appointed him as the first ever VPW Commissioner. 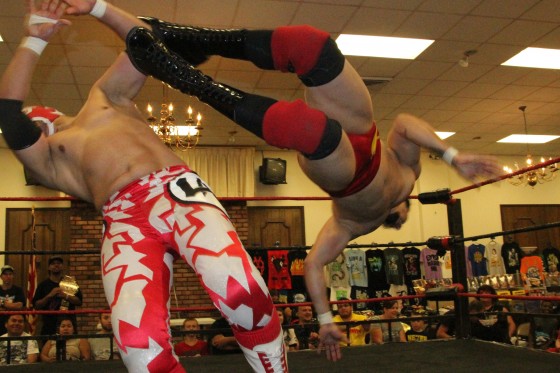 NEW YORK STATE CHAMPIONSHIP
Destructico vs. “Firebird” Jorge Santi (c)
Before the match started, Destructico yelled at the fans in Spanish about how they were trash and how he would become the new New York State champion tonight.

Manhattan’s son and newly crowned champ Jorge Santi had something to say about that in the opening contest.  Showing the fire that helped him at the Gold Rush Rumble, Santi’s first title defense was a successful one.

After the match, EJ Risk came to the ring with four women.  Once in the ring, he announced to the fans that VPW was exciting, but it was the same thing, over and over.

His first announcement was that he was the first ever VPW Commissioner, and his first action as Commissioner was to activate a Women’s division.  The four women he brought to the ring, Nikki Addams, Chrissy Strat, Monique, and Karen Yu, would be the foundation of this division.

His next announcement was that next month, at Autumn Uproar, VPW would be bringing in a former world champion from ECW, WCW, and WWE, the international superstar Sabu.  Risk wasn’t going to just announce Sabu, he went one step further and announced his opponent: Kai Katana.

Risk answered the questions about the VPW Tag Team Championships, and that at Autumn Uproar a new tournament to crown champions would be held.

Risk turned his attention to the main event.  First, as he stated earlier, Risk changed the match because it was the same thing we’ve seen before.  He announced that VsK would not be in the main event, that he would be facing Super Pogo! later that night.

VsK vs. Super Pogo (w/ Mystical Maji)
Not happy with being taken out of the main event and an opportunity to be VPW champion, VsK took his frustrations out on Super Pogo.

Super Pogo mounted a comeback and looked to be on the way to besting the former champion, but VsK was able to overcome and pull out the victory.

Down Boy Tony (w/ Chrissy Strat) vs. Cooley K
Before the match, Tony introduced his valet Chrissy Strat, who used to live in New York, but opened up her eyes and realized that New Jersey was the best.  He then proclaimed that at Autumn Uproar in November, him and Steve would be the new VPW Tag Team Champions.

Once things started, it looked like it was all Cooley K.  Tony was able to take control, with a little help from Chrissy.  But in the end, it was Cooley K to pick up the win.

After the match, Cooley K explained the injury that K-MC received, that he hopes he’ll be healthy and cleared to wrestle, but if not, he’ll find a new partner and reclaim his place as VPW Tag Team Champion.

ELIMINATION SCRAMBLE
Razzle Dazzle (w/ Mikey Old School and Nikki Addams)
vs. Dorian Graves (w/ Jake Hendrix)
vs. Mister A.O.
vs. Fighter Cat
As the match started, Grop the Caveman came out and pointed the fact that Jake Hendrix was just Jacob Hendrix in a mask, and then he chased Hendrix outside the venue.

First to go in this match was Mister A.O., but not after establishing himself as a competitor, almost eliminating Razzle Dazzle and Fighter Cat.  Fighter Cat, showing amazing agility, wowed the crowd before he was eliminated.

Showing her allegiances to Mikey Old School, Nikki Addams proved to be more than just a cheerleader.  Interfering several times in the match, Nikki almost helped Razzle Dazzle win, but a big boot and a TKO from Dorian Graves sealed the deal.

After the match, Nikki Addams told the fans that there would be no Women’s division without her, and that she wasn’t going to go home without a fight.  Monique and Karen Yu came from the back and immediately, Nikki hid behind Razzle Dazzle and Mikey Old School. 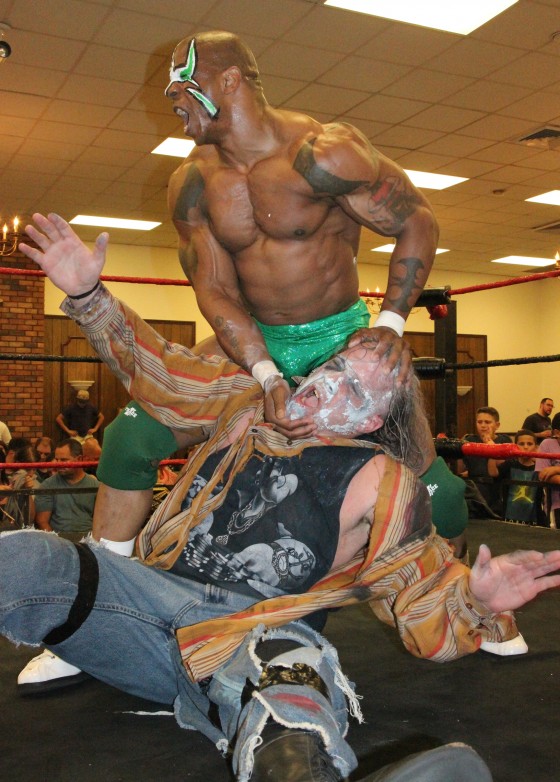 Ahtu vs. Zombie
The massive 265 pound monster from Days Untold would go up against the fan favorite Zombie.  It was a match that Zombie was not used to having in VPW, where he was not the bigger or more powerful wrestler.

Zombie pulled out all the stops, looking to defeat Ahtu, but in the end it was a doomsday slam to end it. 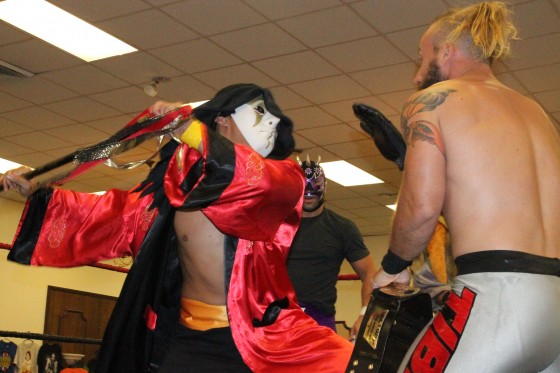 As ring announcer John E Radioo was set to make announcements and take the show into intermission, Kevin Tibbs came to the ring.  He talked about how tonight he would face Kai Katana and defend the VPW Championship against him, and that he would come out victorious.

Kai Katana then came to the ring, and after an initial staredown, he attacked him with his walking stick.  The Church of Tibbs joined in and attacked Kai Katana, who kept fighting all three members.  Referees were called out by EJ Risk who helped break the fight up.

TRIPLE THREAT
Nikki Addams (w/ Mikey Old School and Razzle Dazzle)
vs. Karen Yu
vs. Monique
As soon as the match started, Nikki went straight to the locker room.  Karen and Monique were not having that, as they chased her and brought her right back to the ring.

The two of them ganged up on Nikki, until an accidental clothesline from Monique knocked down Karen.  She apologized, Karen forgave her, and then they went back to double teaming Nikki.

Nikki ducked a right hand from Karen, who accidentally struck Monique, and then things got ugly.  It became an every-woman-for-herself fight, and Nikki took this time to slide outside the ring and bide her time.

Monique hit a face forward slam, knocking Karen out of the competition, but Nikki came in, connected with a big boot, and rolled Monique up for the win. 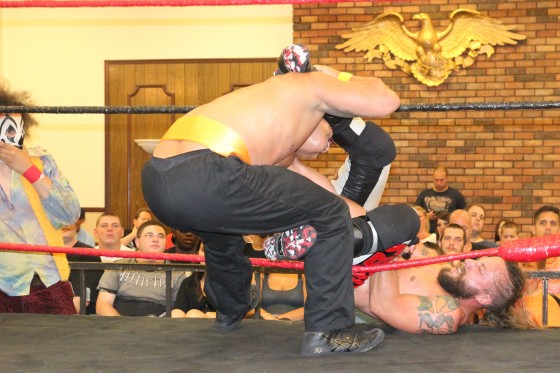 MAIN EVENT
VICTORY PRO WRESTLING CHAMPIONSHIP
“Savior of Wrestling” Kevin Tibbs (w/ Jake Hendrix) (c) vs. Kai Katana
Tibbs took control of the action but Kai Katana was able to power back into dominance.  A classic battle between the two for the top prize in Victory Pro Wrestling showed that Commissioner Risk’s decision to change the main event may have been a good one.

The champion worked on the arm of Kai Katana throughout the whole match, even using the ropes to try to stretch the arm, much like Katana does to his opponents. 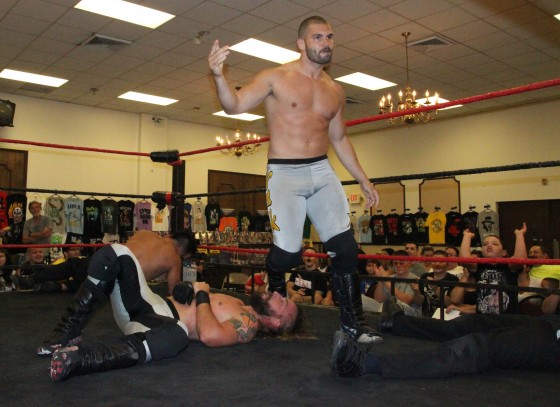 The end came too soon, though, as VsK surprisingly shot from the locker room and attacked Jake Hendrix, then Kevin Tibbs and Kai Katana, and even elbowing the referee.

He then grabbed the VPW Championship, threw it at the feet of the downed Kevin Tibbs, and went to the locker room without a word.