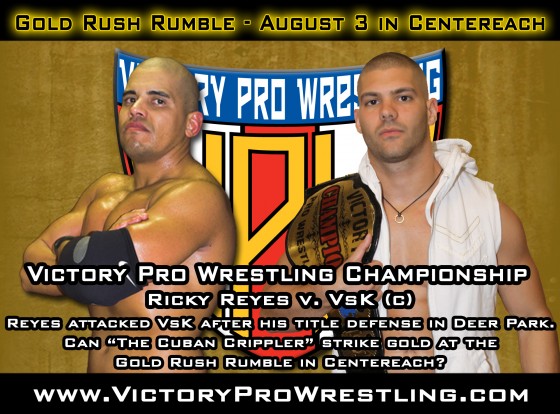 Ricky Reyes and VsK definitely have history together, two sides of a war between VPW and Reyes’ ConfluxXx.

When VsK was VPW New York State Champion, he was unstoppable.  Challenge after challenge, he came out on top.  When he finally lost the championship, it was to rival Ricky Reyes.

A coupe of months later, ConfluxXx suffered a loss when a team led by VsK (VsK, The Funky Fresh Boyz, and Richie Tyler) beat them in a Steel Cage Survival match.

Then, along with Kevin Tibbs, VsK beat ConfluxXx’s Eclipse to become one half of the Victory Pro Wrestling Tag Team Champions.  Again, a team unstoppable, overcoming the odds and facing teams from inside and outside of VPW.  When they finally lost, it was Reyes covering VsK for the victory. 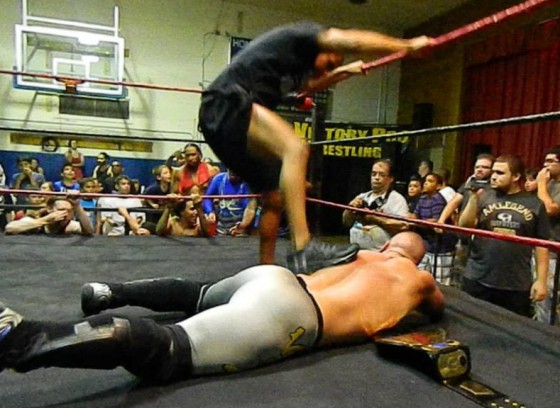 After successfully defending the VPW Championship against ConfluxXx member Jay Delta at “Eighty…and Counting” in a brutal Lumberjack match, Ricky Reyes attacked VsK and challenged him for the top prize at the Gold Rush Rumble.

Will Ricky Reyes become the next VPW Champion?

Reyes was asked his thoughts about VsK as champion:  “VsK thinks he is the best in Victory Pro Wrestling, but he keeps forgetting that as long as I, Ricky Reyes, is here, that will never be the case.”

“In fact,” he continued, “at the Gold Rush Rumble, I will prove once again that I am better than he is by becoming the Victory Pro Wrestling Heavyweight Champion.”

What will happen when “The Cuban Crippler” challenges VsK for the Victory Pro Wrestling championship at the Gold Rush Rumble?