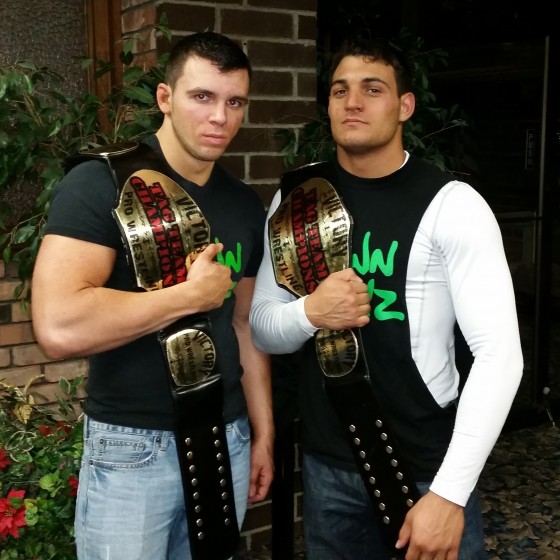 Victory Pro Wrestling stripped Da Hou$e Party of the VPW Tag Team Championships in August, and last night filled the void and crowned new champions in a tournament that saw The Down Boyz take the gold to New Jersey.

It all started in a jam packed VFW hall in Centereach, filled to standing room only capacity, and ended with the team that injured K-MC and put the VPW tag titles in jeopardy in the first place. 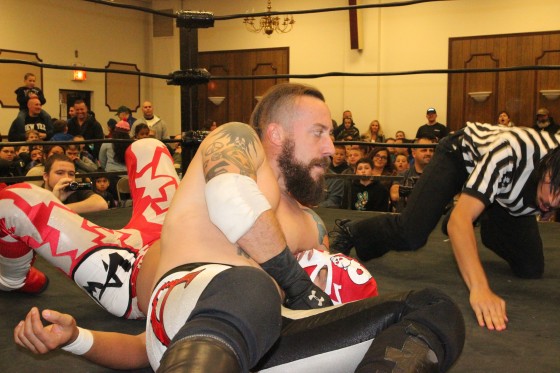 Dorian Graves has been more confident in the ring and Kevin Tibbs, the current 2-time VPW champion and 2014 King of New York, was hungry for more gold.  The reunited Super Best Friends team of Razzle Dazzle and Destructico showed they could work together still after being apart, but it was the Church of Tibbs that picked up the win.

WINNERS: The Church of Tibbs 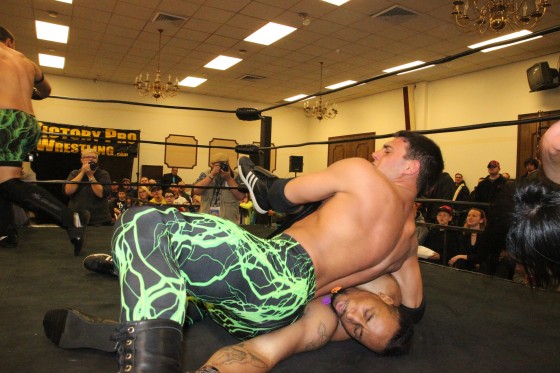 You couldn’t find a single tag team to visit VPW since 2012 that could beat Da Hou$e Party and pose a threat to their titles.  However, with K-MC out, Cooley K has teamed up with different partners to try and find a serious groove.  While he and Super Pogo were able to gel together, they did not have the kind of connection needed to overcome the dynamic of the Jersey Invasion. 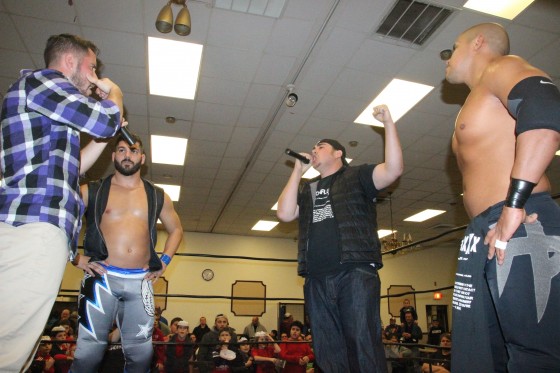 VPW Commissioner EJ Risk came to the ring to announce that the main event was set, and the Victory Pro Wrestling tag team titles would be crowned tonight between the Church of Tibbs or The Down Boyz.  He also announced that our special feature between Kai Katana and hardcore legend Sabu was a match he was excited to see.  Then, his focus turned to the VPW Championship.

VsK’s music cut off Commissioner Risk’s train of thought.  VsK came right out and told Risk that if he was looking for the next contender to the VPW Championship, he didn’t need to look any further.  Risk took VsK’s words to heart, but said there was many others in VPW that could also make that claim.

Cue Ricky Reyes and Kevin Fulton.  ConfluxXx came down to the ring, and with the Cuban Crippler in the ring, Kevin Fulton laid claim that tonight, if anyone deserved a VPW Championship match, it was the best wrestler at everything in the world worth being best at, Ricky Reyes.

Risk then signed a match to happen right there and then to determine who, in fact, would get the next title shot for VPW’s top prize. 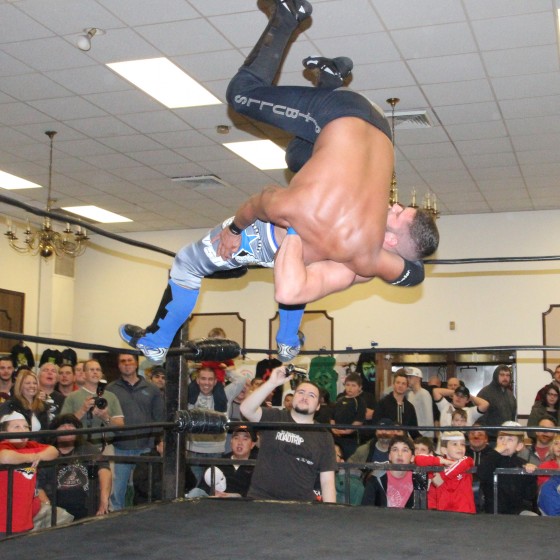 The two rivals had been at each other’s throats on and off for over five years.  A wrestling clinic was held between the two top stars, and VsK’s fire and hunger was intense.

Maybe in the back of VsK’s mine was the New York State championship match they had, or the VPW Tag Team Title match, both with VsK falling to Reyes.

Or perhaps Reyes was just hungrier this time.  It doesn’t matter what was going on, the only thing that woudl matter is that it would be Ricky Reyes to get the win this night, granting him an opportunity to face Kevin Tibbs for the VPW Championship.

Once the bell started, it was all business for Santi, Fighter Cat, and The Zombie.  But for Mister A.O., it was about opportunity.  When he saw his opponents down, he was quick to tag himself in.  When they started to fight back, he was quick to tag himself out.  This game plan backfired after a flurry of action took place with both sides cleared up and Ahtu set to finish things off on a downed Fighter Cat. 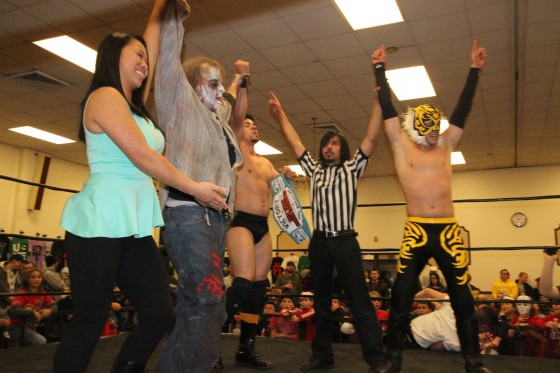 Mister A.O. tagged himself in, and told his partners that he had everything under control, that he had it in the bag, and that it was just a stupid cat, nothing serious.  Except for one thing: Fighter Cat had just crawled his way back to his corner and tagged in Santi, who was able to pick up the win.

Karen Yu entered the ring to celebrate with her team, but Nikki Addams was not having that.  She stormed the ring and started to brutally attack Karen Yu.  After being torn apart by several officials, a switch flipped in Karen’s mind and she went ballistic, charging through and attacking Nikki Addams!  They were torn apart several times before finally Nikki Addams had enough and went to the back with Mister A.O.

With new ring attire and entrance music, the former New York State Champion Kai Katana entered the ring, ready for battle.  He was not ready for the extreme intensity of Sabu, who before the match even started threw a chair in the ring.  The two battled in and out of the ring, and the standing-room only fans in attendance could not get enough.  Katana showed signs of victory, hitting his moonsault, but Sabu kicked out.  Going to the well one too many times, Katana soared from the top into a chair thrown from Sabu, who picked up the win with an Atomic Arabian facebuster.

After the match, Sabu showed a sign of respect for Katana, even after winding up with a chair for an attack after the match.  He threw the chair down and raised Katana’s hand before heading to the back. 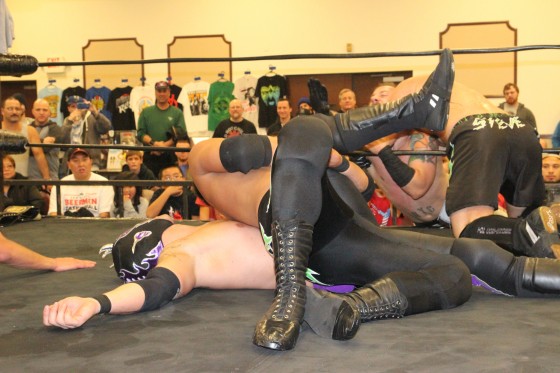 Kevin Tibbs and Dorian Graves have worked together for a long time, but with Graves as a disciple to the Church of Tibbs.  Tony and Steve had teamed up for years in New Jersey before coming to VPW.  Kevin Tibbs is a former VPW tag team champion, but Graves is still young and untested.  Tony and Steve’s experience as a team, while young, is still a major factor.

The match was intense.  Two of the best teams in VPW right now, going at it tooth and nail, for VPW’s top tag team prize.  During the match, Grop the Caveman felt it was time to show the world that Jake Hendrix was, in fact, Jacob Hendrix, but ended up with a busted face after a chairshot by the masked assistant to Kevin Tibbs.

Inside the ring, the action was so intense and the fight was so close, the referee had hit the mat for a three count on several occasions, but with the participants kicking out at the last possible millisecond to keep the match going.

The match ended with a Doomsday Dropkick Device from the Down Boyz that helped crown them as the new VPW Tag Team Champions.

WINNERS AND NEW VPW TAG TEAM CHAMPIONS: The Down Boyz

After the match, the locker room emptied, with every VPW star in the ring attacking each other, not giving The Down Boyz a chance to celebrate their victory.  It ended with Cooley K and Super Pogo standing tall, laying claim to the VPW tag titles, before the official had to get the titles and properly award them to the new champions.

It’s safe to say that The Down Boyz reign as VPW Tag Team Champions will be interesting, to say the least. 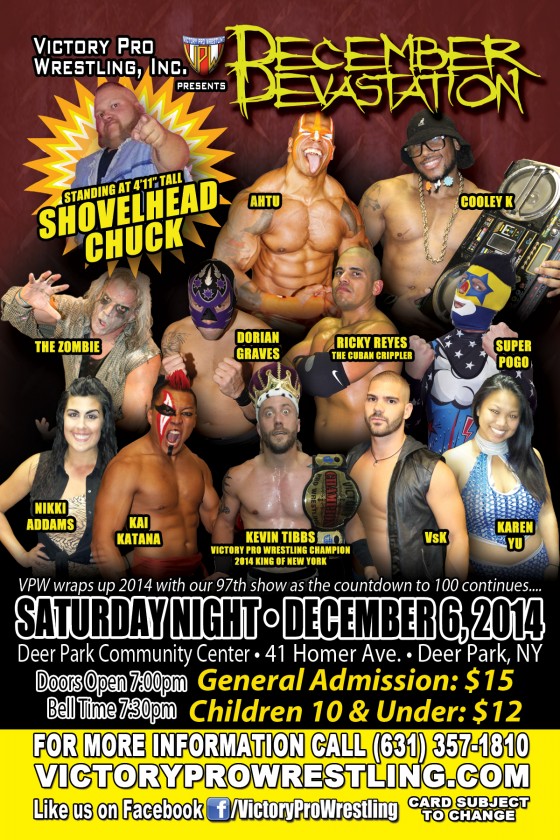 What will happen at
December Devastation?