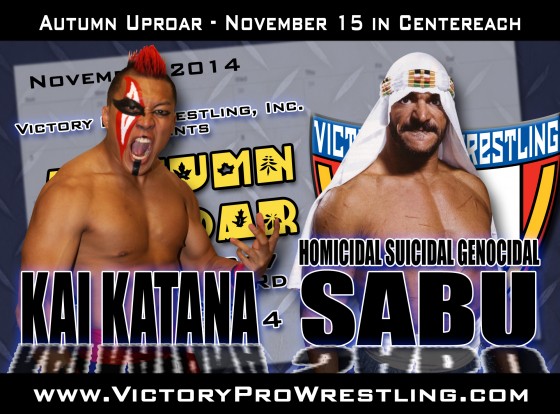 It all started when VPW Management signed former world’s heavyweight champion Sabu to our November show, Autumn Uproar.  That alone was enough for long time hardcore wrestling fans to salivate at the thought of seeing one of the forefathers of ECW perform in Centereach.

But things became serious when VPW Management signed former New York State Champion EJ Risk as its first ever commissioner.  The former champion decided to turn things up a notch and not just let the fans know that Sabu was coming to VPW, but that he would be facing Risk’s former adversary Kai Katana.

Why Katana?  Why not another one of VPW’s superstars?  There’s no doubt that Katana is one of the most dominant VPW stars since his debut, but what was Risk’s motivation to choose Kai Katana over say VsK or VPW Champion Kevin Tibbs?

Perhaps it’s his bitter rivalry with Kai Katana while EJ Risk was chasing the New York State Championship last year.  He knows first hand how tough Katana is and what kind of punishment he can deliver.

Risk is friends with VsK, although they did have a rivalry as well. And Risk’s history with Kevin Tibbs is legendary.

Whatever the reasoning is, Sabu against Kai Katana may be one of the most intense matches Victory Pro Wrestling has ever had.