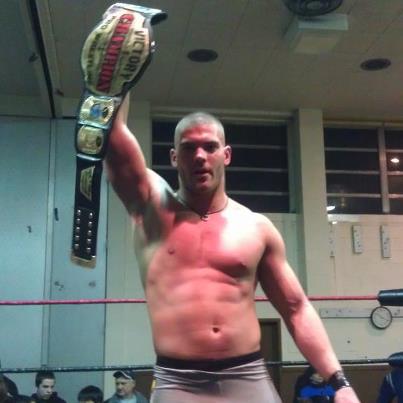 But it almost did not happen.

After the match, K-Fresh addressed the fans, thanked them for celebrating Victory Pro Wrestling’s 7th birthday, and told them that it didn’t matter who would win the #1 contendership later that night, that he would walk away Spring Fever on April 20 in Centereach still as New York State Champion.

NUMBER ONE CONTENDERS MATCH
FOR THE NEW YORK STATE CHAMPIONSHIP
Kai Katana d. Johnny V (w/ Mikey Old School)
Johnny V came back to Victory Pro Wrestling ready for a fight, and a fight he received with Kai Katana.  Unable to figure out the Asian machine, Katana picked up the win.

After the match, K-Fresh came to the ring with the New York State Championship. Without saying a word, Katana motioned that he would wear the belt around his waist.

JERRY FITZWATER SHOW
Jerry Fitzwater, along with Grop the Caveman, came out with a song about VPW’s anniversary.  Before he could finish, though, EJ Risk‘s music hit and the former King of New York came out to be Fitzwater’s guest.

That’s when EJ called out the 2013 King of New York Jay Delta.

2013 King of New York Jay Delta d. EJ Risk
After wrestling twice before in the evening at the King of New York tournament in February, both EJ Risk and Jay Delta wrestled an amazing match.  This time, both fresh and ready to go, they put on a possible show stealing match, with the new King victorious.

After the match, ConfluxXx member Ricky Reyes came out to celebrate with his partner Jay Delta, and then the two started to attack EJ while he was down. Reyes grabbed the mic and told the fans that now that they’ve trimmed the fat and taken out the garbage, he would beat down Amazing Red later on in the night.

Reyes and Delta then started to work EJ some more when Amazing Red came out to make the save.

VICTORY PRO WRESTLING TAG TEAM CHAMPIONSHIPS
Da Hou$e Party (c) d. Destructico and Razzle Dazzle
Razzle Dazzle teamed up with unlikely partner Destructico, who returned to Victory Pro Wrestling for a chance to become a champion.  Cooley K, K-MC, and Da Boombox brought “da party,” as well as bringing the fight.  They showed the fans that tag team wrestling is still alive today, and they picked up the win.

“The Cuban Crippler” Ricky Reyes d. Amazing Red
At the King of New York tournament, Amazing Red defeated Ricky Reyes in the first round to advance, leaving Reyes with the loss.  The ConfluxXx leader was not satisfied with that loss, and after costing Red a chance to get into the finals, he wanted more.

Another potential show-stealer, Red and Reyes tore the house down.  Finally, after an amazing match, Reyes was able to score the victory.

VICTORY PRO WRESTLING CHAMPIONSHIP
VsK d. Kevin MISTER Tibbs (c) (w/ Jacob Hendrix and Dorian Graves)
Former best friends, former tag team partners, and former tag team champions collided again inside the ring.  Showing frustration throughout the match, and using his allies outside the ring, Tibbs finally snapped and shoved the referee’s face, giving VsK the win with Tibbs being disqualified, but Tibbs to walk out of Deer Park still as champion as championships do not change hands on disqualifications.

However, Victory Pro Wrestling management instantly said otherwise, ordered the ring announcer to the ring to inform the referee of the decision, and then announce to the fans that Dorian Graves and Jacob Hendrix were ejected… and that the match was to restart and not end by disqualification!

Diving through the ropes, VsK was happy to get a second chance to right this wrong, knocking everyone down in the process, then connecting with a super kick to knock out Jacob Hendrix.

Bringing the action back inside the ring, VsK and Tibbs went back and forth.  A failed super kick from VsK distracted the challenger, and Tibbs took over, trying to put away VsK.  Time and time again, however, the challenger would kick out.

Looking above, Tibbs asked what he had to do to win.  Still unable to win, Tibbs fell victim to a second super kick that sealed the deal and ended the Mister Tibbs era.