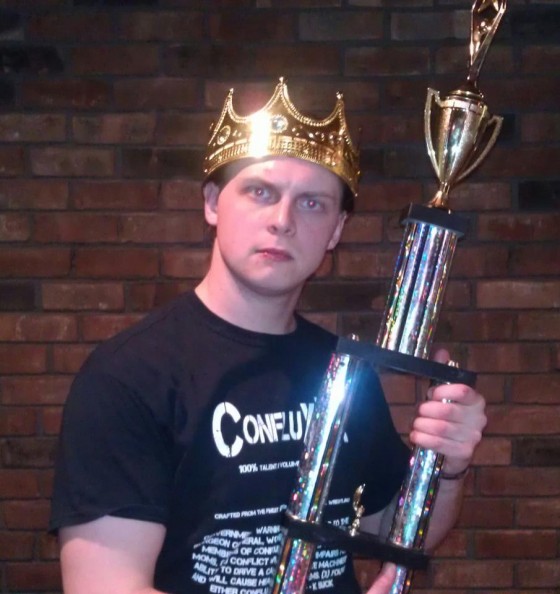 In front of an incredible, excited sold out crowd at the VFW Hall in Centereach, Jay Delta outlasted 11 other wrestlers to become the 2013 King of New York!

THE JERRY FITZWATER SHOW
The show opened up with Jerry Fitzwater announcing that someone had a birthday today, but first, he introduced his guest, the Victory Pro Wrestling champion Kevin MISTER Tibbs, accompanied by his administrative assistant, Jacob Hendrix.  Tibbs announced that tonight, he was forced to wrestle in this non-sanctioned no rules match but said that at the end of the night, he would retain the championship.

That’s when Fitzwater brought it back to the fact that it was Mikey Old School’s birthday.  A cake was brought out from the back, and Fitzwater started a “Happy Birthday” song.  Tibbs and Hendrix both came out to wish Old School a happy birthday, but then smashed the manager’s face into the cake!

KING OF NEW YORK ROUND 1
VsK defeated masked newcomer Dorian Graves in the show’s opening contest.  Graves showed a lot of power, even coming close to winning, but VsK showed his veteran stripes and picked up the win.

KING OF NEW YORK ROUND 1
Kai Katana defeated “Firebird” Jorge Santi in a rematch from their May 2012 encounter.  Santi showed that he was ready this time, but Katana pulled out another win against the Firebird.

KING OF NEW YORK ROUND 1
Jay Delta defeated K-MC of Da Hou$e Party to advance to the next round of the tournament, getting a little retribution for ConfluxXx, since it was Da Hou$e Party that took the titles from Jay’s stablemates in October.

KING OF NEW YORK ROUND 1
“Man of Faith” Brian XL” defeated Razzle Dazzle (with Rod, the official holder of Tux, the Penguin).  Razzle introduced his new manager, who was no help as XL was able to pull out the win.

KING OF NEW YORK ROUND 1
EJ Risk defeated Cooley K of Da Hou$e Party, showing the same resiliency and fire he showed in the 2011 and 2012 tournaments, which Risk both won.

After the match, EJ hosted an impromptu “Risky Business” show, where he called out his fellow ConfluxXx members Jay Delta and “The Cuban Crippler” Ricky Reyes.  Without wasting time, EJ admitted that he made a mistake, and asked his partners to let bygones be bygones.

A brief deliberation between Reyes and Delta ended with a beatdown of EJ Risk.  They dragged him back to the locker room, beating EJ all the way.

Reyes came back to the ring, said that EJ was right about one thing, someone from ConfluxXx would be the King of New York, but it wasn’t going to be EJ Risk.

He then called out anyone to come out for his match, and out came Amazing Red!

KING OF NEW YORK ROUND 1
Amazing Red defeated “The Cuban Crippler” Ricky Reyes in an exciting match that may have made Reyes regret the open challenge.  After the match, Reyes showed frustration that Red was able to advance in the tournament.

KING OF NEW YORK SEMI FINAL TRIPLE THREAT ROUND
EJ Risk defeated Kai Katana and “Man of Faith” Brian XL to advance to the finals of the tournament.  The fans were behind EJ in the match, showing signs of compassion after the beatdown his now-former ConfluxXx members gave him earlier in the night.

KING OF NEW YORK SEMI FINAL TRIPLE THREAT ROUND
Jay Delta defeated VsK and Amazing Red to advance to the finals after a match that shows VsK and Red both showing signs of teaming up, and trying to steal the win from each other.

After the match, Ricky Reyes challenged Amazing Red to a rematch at the 7 Year Anniversary Show in Deer Park, March 23.

VICTORY PRO WRESTLING CHAMPIONSHIP
NO RULES STREET FIGHT
“The Savior of Wrestling” Kevin MISTER Tibbs (c) (with Jacob Hendrix) defeated “K-Fresh” Kevin Fulton to retain the Victory Pro Wrestling Championship.  The match crossed lines that did not exist in this match as there would be no count-outs, no disqualifications.

Tibbs’ earlier declaration that he would walk out as champion almost did not happen, as he was locked in a vicious submission hold.  The referee counted the arm, got to a two-count, but masked newcomer Dorian Graves came back to the ring with a vicious assault on the challenger, then dragged Tibbs on top of Fulton to end the match.

After the match, a frustrated Fulton grabbed his New York State Championship and challenged Graves to a match, and the fighting champion he is, Fulton is going to put his title on the line!

KING OF NEW YORK FINALS
Jay Delta defeated EJ Risk to become the 2013 King of New York, but not without a little blind help.  With EJ looking strong, charging the ring and controlling the match early on, Delta pulled the top turnbuckle off the corner.  With the ref trying to put the turnbuckle back together, Delta hit EJ with a low blow, setting up a roaring elbow to pick up the win..

After the match, an elated Reyes celebrated with the new King of New York, King Delta, then they started to beat down EJ until VsK came down to clear the ring.

VsK made a challenge for the 7 Year Anniversary Show, saying that he’s sick and tired of Tibbs’ running from him, and that what a fitting match to have at the biggest show in VPW, VsK against Kevin Tibbs for the Victory Pro Wrestling championship.

After calling VsK a spotlight hog, EJ Risk made a challenge of his own, saying that he wants another piece of Jay Delta when Victory Pro Wrestling returns to the Deer Park Community Center March 23 for the 7 Year Anniversary Show.

What will happen when Victory Pro Wrestling returns to the Deer Park Community Center?