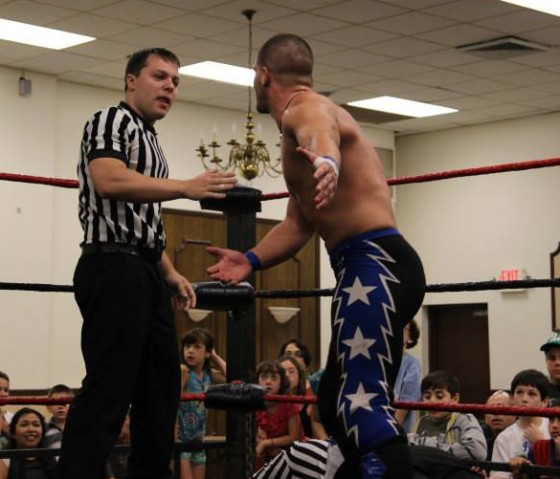 With so many feuds coming to head at Victory Pro Wrestling’s “Boiling Point,” it was surprising that at the end of the night, there were more questions than answers.

The show opened in Centereach in front of a capacity crowd with the Church of Tibbs coming to the ring, flanked by the “Savior of Wrestling” Kevin Tibbs, who told the fans that it was he who saved Jacob Hendrix from Razzle Dazzle, and that ever since then it was Razzle Dazzle trying to stick his nose in the Church’s business.

After tonight, there would be no more Razzle Dazzle. Tibbs also said that later on in the evening, despite beating “K-Fresh” Kevin Fulton in a no-rules street fight earlier this year with a bum arm, that tonight he was at 100-percent, and that he would DEFINITELY beat his former tag team partner as a result.

There were no introductions for Dazzle or Pogo! as they charged the ring to take on their opponents. Several weeks ago, Dorian Graves had kidnapped Razzle Dazzle’s hand puppet Tux the Penguin and taped him to the corner, and Razzle Dazzle was distracted by seeing his puppet, but it wasn’t enough to seal the deal when the NEW Super Best Friends were able to pick up the win against the former contenders to the VPW Tag Team Championship!

After the match, while Razzle Dazzle and Super Pogo! danced in the ring, Kevin Tibbs came back from the locker room and berated Jacob Hendrix, blaming him for the loss.

Mister O. A. against Dr. Lamar Braxton Porter against “Firebird” Jorge Santi
Mister O. A. trashed the crowd before combing his hair and waiting for his opponents. Dr. Lamar Braxton Porter was as determined as ever, even without his Adjustment Bureau partner Nasty Nick Lecter at ringside. And the Firebird is always ready for action, but things didn’t look good for him at first as both O.A. and Porter took turns to wear out Manhattan’s son.

Eventually, O.A. started to fight in a “every man for himself” mentality and went after both opponents, but after Santi sidelined Porter, he finished off Mister O.A.’s debut with a loss.

Now it’s time for the Jerry Fitzwater Show, where Grop the Caveman brought what looked to be an industrial refrigerator door to the ring. He dropped an elbow on the door and then hit a top rope splash, but we never know if he could win because he never made the cover.

From there, Fitzwater brought out his guest, “K-Fresh” Kevin Fulton. Fulton talks about the numbers game, and how Tibbs may have the Church of Tibbs on his side, but “K-Fresh” can count on VsK to be in his corner when he needs him. Then, rather than wait until later in the night, he called out Kevin Tibbs for their match to take place.

“Savior of Wrestling” Kevin Tibbs (with Jacob Hendrix) against “K-Fresh” Kevin Fulton
Tibbs was clearly the dominant wrestler in this one early on, showing his technical ability while keeping his former partner down. With the fans behind him, K-Fresh” rallied back, and several times showed signs of victory over his opponent.

Dorian Graves charged the ring and caused a distraction, and while the official was trying to send the masked disciple back, Jacob Hendrix threw a chair in the ring to Tibbs – except “K-Fresh” caught it. The shock of the bad throw caught Hendrix off guard, but the shock of the chair hitting Hendrix in the head brought a supporting cheer from the crowd.

Tibbs took advantage of that and dropped down as if he was hit, so when senior official John Q turned around, he saw Tibbs down and K-Fresh with the chair in hand, and immediately disqualified Fulton.

Victory Pro Wrestling champion VsK came to the ring and told the fans that tonight, he would guarantee that he would walk away as their champion.

For the past three years, ConfluxXx had dominated Victory Pro Wrestling, and their sole purpose, according to VsK, was to take him out. Despite their pure hatred for VsK, three years later he was VPW Champion.

Meanwhile, EJ Risk had left the group, VsK broke Jay Delta’s jaw and effectively took him out, and nobody has seen or heard from Xander Page for a year.

Tonight, VsK said he would finish the job and end ConfluxXx with a victory over Ricky Reyes once and for all.

When the bell rang to start the match, he proved those were not just words but beliefs. Both wrestlers went back and forth, as this was one of the first times we’ve seen the title reign of Katana threatened since he became champion.

It wasn’t enough though, as Katana was able to score the win to defend the title with a cheap win as his feet were on the ropes.

A frustrated EJ Risk refused to comment when ring announcer John E Radioo came to the ring, swatting the microphone away as we went into intermission.

As intermission was ending, and as Radioo was wrapping up his announcements, “Firebird” Jorge Santi came out and interrupted him.

He announced that tonight, Amazing Red and Brian XL were to challenge Da Hou$e Party for the VPW Tag Team Championships, but that Brian XL was unable to make it to Centereach.

Seizing the opportunity to become a champion, and not wanting to disappoint the VPW fans, he offered to be Amazing Red’s partner.

Amazing Red came to the ring, had a few words with Santi, and then accepted his friend’s offer, much to the joy of everyone in Centereach!

VICTORY PRO WRESTLING TAG TEAM CHAMPIONSHIP
Firebird Jorge Santi and Amazing Red against Da Hou$e Party (Cooley K and K-MC) (c)
The difference between Red and Santi as opposed to Red and XL is that Red and XL have worked together and train together in Brooklyn.

Red and Santi, while they had chemistry together, they didn’t click the same way and at times it showed.

The seasoned veterans and current tag team champions Cooley K and K-MC clearly had the advantage in that aspect, but that didn’t make it an easy victory for them.

Red showed why he earned the nickname “Amazing” and Santi showed why he deserves to be in the title hunt, but in the end, Da Hou$e Party worked together to pick up the win and defend the titles.

After the match, the four celebrated the win with the fans, showing incredible sportsmanship to each other and to the fans.

VICTORY PRO WRESTLING CHAMPIONSHIP
VsK (c) against “The Cuban Crippler” Ricky Reyes
The time for talk has ended, and the time for action was now. A big fight feel in Centereach with the company’s top prize in the balance.

The official on record was Raul, and the action was non stop once the bell rang. The fans were clearly in support of the champion, as they also wanted to see the end of ConfluxXx, and it was very difficult to see who would get the upper hand as the action went back and forth between Reyes and VsK.

The action was so hot that, unfortunately, Reyes accidentally kicked the official and knocked him out. This caused a problem when VsK connected with the super kick and covered Reyes, but junior official Chris charged the ring and first went to check on Raul to make sure he was okay. This did not sit well with the champion, as the frustrated VsK – who clearly had Reyes down for the count and then some – super kicked the official in the gut, taking him out.

This brought out senior official John Q to the ring, but instead of picking up the action and letting the match continue, he threw the match out as a no contest, as both Ricky Reyes and VsK had each attacked an official.

The official almost ate a boot as well as VsK went for the super kick, but the official just barely dodged the kick. So VsK took his frustrations out on Ricky Reyes, connecting with another super kick on the challenger.

As Ricky Reyes crawled to the back, VsK first blamed junior official Chris, saying that if he had just made the count, none of this would have happened.  Then, he turned his attention to the challenger, saying that he was a fighting champion, and proposed that November 2 at Autumn Uproar, VsK would defend the title again against Ricky Reyes to settle it all in Deer Park.