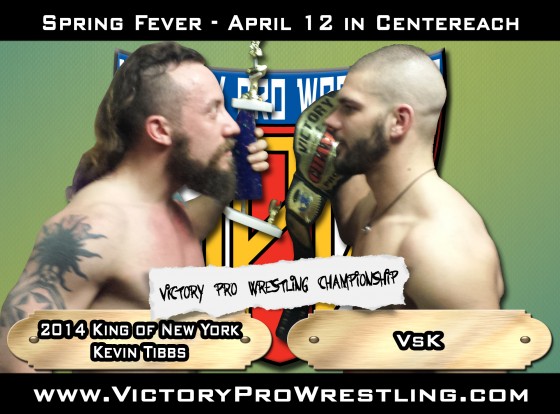 Kevin Tibbs and VsK.  Two men, one prize, the Victory Pro Wrestling championship.  These two former best friends are bitter rivals, and their rivalry has come with a price.

VsK has seen friendships come and go, but he always strived to be the best wrestler in Victory Pro Wrestling.  His rise through the New York State and VPW Tag Team Championships finally proved to be fruitful March 23, 2013, the day VsK ended Kevin Tibbs’ 357 reign as Victory Pro Wrestling Champion.

April 12, 2014, 386 days later, Kevin Tibbs has the same chance to end the reign that ended his.  Determined to be the best wrestler in VPW, the former champion believes the only way to do that is by reclaiming the championship he believes is rightfully his.

Several casualties have arisen in this war, including former VPW Champion Jason Static, a pawn in Tibbs’ plan to take out a top contender and suffered an injury that kept him from wrestling for almost a year; Kevin Fulton, who suffered an attack and a torn ACL; and Amazing Red, who was attacked in February after a match that sent the losing Tibbs into psychotics, which caused the injury.

With the VPW Championship on the line, will Tibbs have the focus he needs to become champion again, or will VsK prove once again he is the best wrestler in Victory Pro Wrestling?