When they first burst on the scene in Victory Pro Wrestling, this tag team came and immediately set their sights on the Victory Pro Wrestling championship.  They told the champs that it was going to happen, and that they were bringing their style of wrestling, and their era of music, to VPW.

Two years later, it looks like history has repeated itself with a “Jersey Invasion” from two Jersey tough guys, thinking they can bring their brand of tag team wrestling and 90s rock and roll to the top of the VPW tag team division and become VPW Tag Team Champions.

The difference was how they made their presence known. 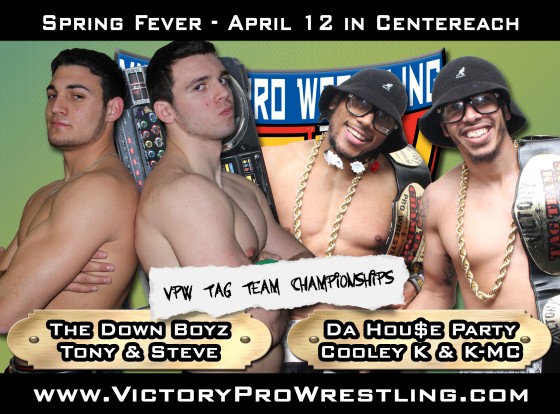 When Da Hou$e Party first came to VPW, they were known as All Money i$ Legal.  The name was different but the team and style was the same.  They showed good sportsmanship to Amazing Red and Brian XL in their first match, which was their first appearance to VPW.

The Down Boyz didn’t exactly show sportsmanship to anyone.  Tony and Steve made their first appearance in VPW came after they paid for tickets to be at the Deer Park Community Center, and they attacked the champions after a hard fought match against Mr. OA and Big Koz.

Da Hou$e Party earned a chance to become the top contenders by winning matches.  The Down Boyz demanded a title shot.

Da Hou$e Party were patient, waiting 4 months for their first title match.  The Down Boyz will barely wait 4 weeks.