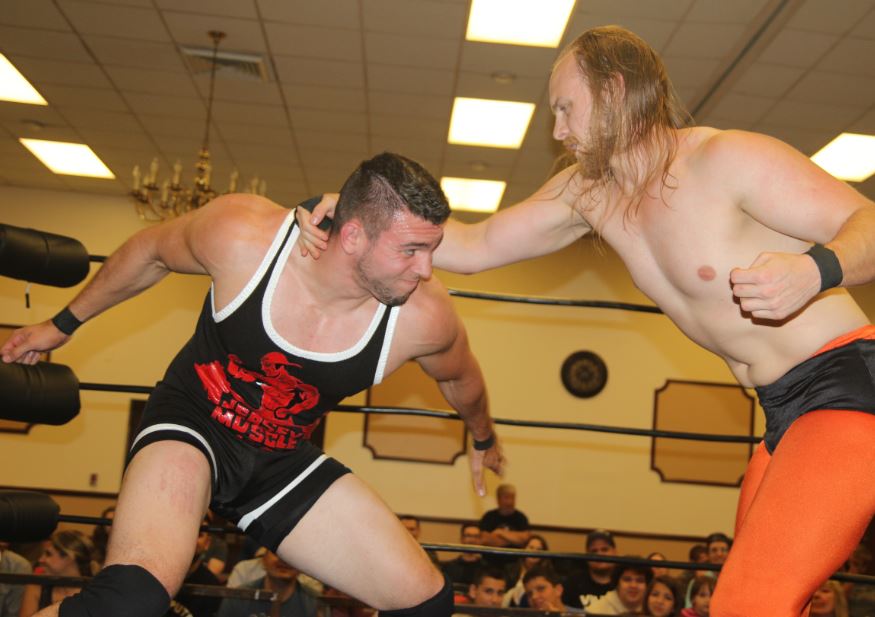 Fans Choice 7, a night dedicated to the fans of Victory Pro Wrestling, was filled with changes and excitement.

And that started from the opening announcements.

There’s a new Commissioner in town, as Kevin Fulton explained in the ring.  With his ConfluxXx ally Jay Delta in hand, he told the fans that he had a meeting last month with VPW Management, and the powers that be decided to terminate his wrestler’s contract.

He then turned to his partner Delta and apologized for not being able to be in his corner an further, but did explain that it was because he was the new commissioner of VPW.

Commissioner Fulton then made two blockbuster announcements.  The first, his best friend Jay Delta would now be in the main event to defend his New York State championship against Steve Gibki.

The second announcement – VsK, the three time Victory Pro Wrestling champion, was without an opponent.  Fulton decreed that the next match would be a fatal five way, with the winner facing VsK for the title… TONIGHT!

FANS CHOICE – RAZZLE DAZZLE REVEALS THE NAME OF HIS “FRIEND”
One of the ballots for Fans Choice 7 was to name the new mannequin head of Razzle Dazzle.  There were so many entrants that Razzle Dazzle and Coach Mammone decided to draw a random winner instead.

Coach drew an entrant whose suggestion we cannot print, as it was so vulgar.

But they drew again and… told the fans they didn’t deserve to pick the name because they weren’t worthy.  Coach berated the fans as unathletic and lazy.

Official Steve Dumeng explained to Caster the stipulations of the match, and that he now had to kiss the ass of Mister Tibbs.  After arguing for a few minutes, Caster bailed and ran to the back.

White Girl cut him off, then dragged him back to the ring, where Mister Tibbs was waiting for the post match stipulation!

After the match, Donovan stood over Adams with both tag titles in hand

The reign lasted all of 2:49 as VPW Commissioner Fulton came out to announce that Sam had no authority to introduce her own official.  The Commish then brought out John Q to officiate and demanded the match restart.

An already winded Queen Sam was knocked off the apron, and then slammed by White Girl, who picked up the win.

Then, she clocked her with a clothesline and dropped her with a DDT, standing over the laid out Queen of New York, berating her before heading to the back.

The Commish came back out, and announced that next month, at 125 and Counting…, Queen Sam and White Girl and Antoinette Marie would meet in a triple threat match for the VPW Women’s Championship!

FANS CHOICE – LUMBERJACK MATCH
COACH MAMMONE vs FIGHTER CAT
It all started with Fighter Cat getting the victory over Razzle Dazzle, and Coach Mammone using that opportunity to make a name for himself.  Four months later, they finally clash in a one on one contest with the locker room surrounding the ring

After the match, Commissioner Fulton announced to the fans that he was just on the phone with EJ Risk, who demanded he get his rematch against VsK for the VPW Championship.

The commissioner announced that he will in fact get that rematch at 125 and Counting… inside the confines of a 15 foot high steel cage!